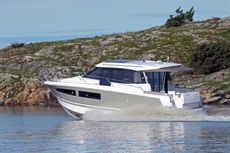 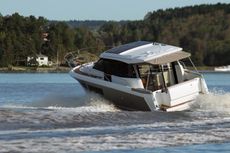 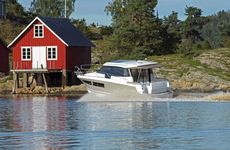 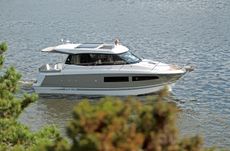 Jeanneau NC 9
Incorporating all the qualities that have made the NC11 a success, the new NC9 perfectly demonstrates the spirit of the line in a more compact model. Experience life at sea in a contemporary atmosphere, enjoy absolute comfort onboard and play with space in a modular design : all these pleasures combine in the NC9!
A perfect synthesis of the NC concept, the new NC9 is a revelation.

The Technology of Beauty

The strength of Jeanneau can be seen in the beauty of our boats. World-renowned designers and architects work with our in-house teams from the inception of each project and provide their expertise and innovative ideas. The result of this partnership: captivating and inspiring designs that stand the test of time.
Performance

A Jeanneau must be responsive, agile and fast. Performance encompasses not only speed but exceptional handling under power, smooth passage through heavy seas, confidence and control. Every experience onboard a Jeanneau is enhanced by our well-balanced sail plans, modern hulls, high-end sails and quality deck hardware.
CATIA®

Each new Jeanneau is comprehensively designed via the powerful CATIA® design software. CATIA® allows Jeanneau to design a better boat with more attention to detail in a shorter timeframe.
Research & Development

A specialized Research & Design facility at Jeanneau houses 130 engineering specialists. This facility is unique in the boat-building sector, providing R&D resources usually available only to large aeronautical and automobile companies.

The Engineering of Beauty

20 years ago Jeanneau developed a closed moulding process called Prisma Process. This technological edge yields a higher-quality part with a lower weight, but also reduces airborne VOCs by 90% as compared with traditional GRP moulding, thus making it a much greener way to produce boats.
A passion for wood

Rich interior woodworking has always been a signature of Jeanneau quality. Using fine quality hardwoods and marine composites, computerized varnishing machines and CNC routers provide precision parts finished to industrial tolerances. These are then individually assembled with the experienced eye and hand of the craftsman.
Economies of Scale

No other builder enjoys the economies of scale available to Jeanneau. As an integral part of the world’s largest sailboat building group, Jeanneau benefits by having access and influence with top-shelf suppliers. This allows us the highest quality materials and components, sourced from the leading suppliers, at appreciable savings to our customers.

From the first artisan-crafted runabout to today’s precision-manufactured sail and power boats, that passion and commitment is now shared by our 2500 employees and our network of over 300 distributors world-wide.

Our customers help drive the innovation and quality that are the hallmarks of Jeanneau. As experienced sailors, their input enables our design and production teams to quickly implement new ideas and enhance proven ones.

The result, as you’ll see, is a way of creating boats of extraordinary quality, value and timeless beauty.

The Timelessness of Beauty

Our total quality control system tracks a product through the entire production process and beyond. From laboratory tests of each batch of resin to tank testing to customer satisfaction questionnaires and frequent supplier reviews, we continually seek ways to improve our boats.
Dependability

Quality starts with the best materials and components. Aboard a Jeanneau you will find equipment from the leaders in each field, because we only use suppliers that share our commitment to quality control and product excellence. These premium suppliers also help ensure servicing of your boat’s components world-wide.
Safety

Peace of mind is part of the Jeanneau experience, which is why safety is standard. We conduct extensive finite element analysis of our structural systems, design secure handholds throughout, utilize large hatches that double as emergency egress routes, and only use the highest quality deck fittings. This helps create the legendary Jeanneau seaworthiness that comes with 50 years of experience in building offshore boats.
ISO 9001

As an ISO 9001 company, the Jeanneau’s building process is certified to the highest international standards. Each new sailboat is thoroughly tested throughout the building process and each receives additional tank testing where all systems are put through their paces.

All Jeanneau boats carry the CE certification which ensures strict standards for stability, safety and structure. In addition, all boats 12 m and over are certified by the Bureau Veritas, an independent engineering certification. This certification includes every part of the conception and building process.

The History of Jeanneau

In 1957, Henri Jeanneau, already passionate about aeroplanes and automobiles, had just discovered a brand new passion for powerboating, one that began as he watched a boat pass by his window. Soon afterward, in Les Herbiers, France, home to a rich heritage of artisan work, he began building a wooden hull with which he participated in the 6-hour Paris race, the largest national race at the time. He was first to cross the line, and this galvanized him. So, a past time became a trade. In 1959, he hired canoe builders as apprentices in his new business, “the Nautical Hall of the West,” which would become, a few years later, the Jeanneau shipyards. France was seeing unprecedented economic growth, and the new company executive quickly understood that the appearance of new electric appliances designed to ease household chores would allow families to devote more time to leisure activities – to the sun, to the sea, and to boating!
The 60’s: the début of Jeanneau powerboats

In 1961, Jeanneau’s first fibreglass powerboat made its début. It was the Calanque. It retained the wooden deck and featured the lines of a frigate, which made perfect sense because it was moulded onto a wooden hull. That same year, a dream became a reality: Jeanneau created the first all-fibreglass boat. This new material, a petrochemical product, created an unprecedented technological advantage. From a single mould, hundreds of hulls could be created. The fibreglass was applied to the mould and impregnated with resin, spread on by a roller. Afterward, workers had only to wait for the new hull to cure, and then they moved on to the next one.

It was the beginning of a grand saga of powerboats built at over 1,500 in a series. One after another, the names followed: the “Squale,” the “Lion de Mer,” the “Caraïbe,” and then the first great Jeanneau motor yacht, the “Impérator 900,” launched in 1966. She was etched into a wall at 1/1 scale. The grand product lines included: Skanes, Arcachonnais, Esteou, Cap Camarat, Merry Fisher, Leader and Prestige.
Within half a century, a revolution took place

From the artisan work of the 1960’s that was the norm in France and elsewhere – each boat was unique, and often customised while still on the production lines – to 2007 and the new technological advances similar to those seen in the aeronautical field, allowing Jeanneau to create boats using 3-dimensional design software and digitally controlled laser-cutting machines. Over the past 50 years of development, the men and women of Jeanneau have evolved in their fields while preserving their passion for the sea and love of work well done. At Jeanneau, the woodworkers have held on to their planes and mechanics have kept their tools for repairs. In the beginning, to test the solidity of the first fibreglass boats, a boat was hitched to a towrope and put in on Lake Tricherie, about 10 km. from the Les Herbiers, France factory and yards. There, at full speed, it was launched over a wooden ramp and into the air, clearing a nearby road, to land in a field. Henri Jeanneau was at the helm, of course. Today, real-life tests are conducted on ocean crossings or circumnavigations.
The 1970’s: Pleasure cruising for the masses

The first Jeanneau sailboats were launched in 1964, a date that is synonymous with the democratisation of pleasure cruising. That same year, Éric Tabarly captured the public’s attention when he competed in the English transatlantic race, “l’Ostar,” aboard his 44-foot ketch, the “Pen Duick II.”

Where would French ocean racing – or even pleasure cruising – be without Eric Tabarly’s victory in 1964? It was the first time that a French national beat the English on their own turf. Tabarly became the pride of France. He passed his passion for the sea on to a new generation, and he created a veritable craze for sailing among the French. He inspired many careers, leaving in his wake a number of skippers who would know fame in their own right, including Alain Colas, Olivier de Kersauson, Philippe Poupon, Marc Pajot, Titouan Lamazou, Michel Desjoyeaux, Philippe Monnet, Francis Joyon, and Jean Le Cam.

In the late 1960’s, pleasure cruising sailboats became mainstream, and shipyards like Jeanneau would produce their first sailboats to benefit from this new enthusiasm for sailing. Technological innovations lowered production and purchasing costs, and pleasure cruising became accessible to the masses. The celebrated Glénans sailing school found its stride in this same period. It was the end of the age of the aristocratic sailor, and sailboat production exploded with the fabulous Sangria, a model launched by Jeanneau in 1970 that sold over 2,700 boats. This formidable success cemented Jeanneau’s place at the forefront of the marine industry in the design and construction of cruising sailboats.
ID: 18166
Launch
£7,800
Carver 32 Without Mooring
£40,000
Freeman 32 Mk 1classic Cru...
£30,000
Thornycroft 39ft Tsdy
£48,000
Sealine F37
£149,500
Astonddoa 70 Glx
£240,000